The biggest fear for UK motorists during the cold winter months and heavy snowfall is the possibility of driving over black ice. The dangers of losing control over a surface with no grip are very serious. However, there are methods to help keep you on the road and prevent road traffic accidents during the colder months.

What Is Black Ice?

Whether rain falls as sleet or freezing rain, depends heavily on the temperature of the air just above ground level. If the temperature is already around freezing or just above, there is no heat in the air to stop the rain from freezing while travelling to the ground. This type of rainfall becomes hailstone and while hail can stick and form ice on the road, it often retains its colour and becomes visible ice, allowing road users to be aware while driving over it. 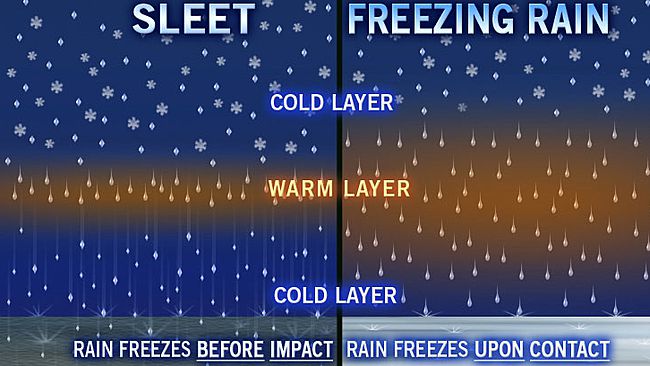 What becomes black ice is rainfall that passes through a layer of warm air on its way to the ground. Because of the warm air keeping it from freezing, it remains a liquid before hitting the ground and freezes upon impact. As the rain is still a liquid it will disperse over a larger surface area while freezing. This large area of freezing usually remains clear, containing no air bubbles, blending into the road surface, giving very little sign, other than a slight sheen, that the road has an extra layer sitting on top. The reason for it being labelled “black ice” is usually down to the fact it camouflages itself on the road surface by remaining clear.

Sliding on ice of any kind is a potential danger to all road users and their surroundings. The added danger of not knowing whether or not the road surface is driveable can be the cause of many multi car pile ups countrywide, causing road closures and slow moving traffic.

Popular advice when driving on ice is to drive slowly and avoid losing grip. The way in which black ice freezes as a flat sheet over the road has the potential to turn tarmac into a sheet, as though the driver has their vehicle on glass. Even winter tyres can struggle to gain grip on these kinds of surfaces and because of this we would heavily advise to think about the necessity of a journey before setting out.

Black ice can’t always be accounted for on your journey. It’s the very essence of it, it is invisible. Local weather reports may give you an indication of ice on the roads; you’ll also be hoping that your local council has taken action and gritted the vast majority of roads on freezing nights, leaving only smaller side streets. As much as this usually resolves 99% of problems driving on ice, there is always the chance that part of your route has been missed. When ice has set in overnight, always assume you will encounter some. It’s much easier to be safe when it comes to road safety in the winter.

If you fall foul of black ice on the road, the chances are you may experience unwanted loss of traction and potentially spin out of control in the worst case. There are, however, a few safe driving tips to employ, should you find yourself on ice and needing to stay calm and in control at the wheel.

Time is definitely NOT of the essence

At any other time of year we can do our best to make meeting times and get to our destinations in good time. Icy weather is definitely a period in which driving slowly, despite the risks of running late, must be the priority. Other road users will be aware of ice on the road and are likely to keep a safe distance, also watching their speed. The last thing other drivers want is to skid and head into the back of your vehicle. Do not be afraid to take it steady and travel at 10mph if necessary or even less should the road surface prove particularly tricky ahead.

When you come to the precipice of a down slope, this is a critical moment for keeping control downhill. Going too fast when hitting ice while travelling downhill could easily result in sliding and gaining too much speed to regain control before the bottom. With black ice being very difficult to spot it’s usually best not to drive at all. If there is no other choice, going slow, steady and keeping a level head (unlike the video below) is your highest chance of keeping in control.

Consistent speed can help avoid unwanted slipping and grip issues on any area of road. The power being output into the wheels can keep a car steady, whereas accelerating on ice of any kind can generate wheel spin, car spins and more of an increase in speed over a slippery surface than you would want, which will affect overall control. Keeping a consistent speed on a down slope may be difficult at times, but a gentle foot on the brakes can help avoid skidding and spinning out.

Should you feel your car begin to slide and turn away from your path, you may need to take the brave step of releasing the brake pedal and regaining control going forward. Locking out the front wheels can cause the car to continue going straight, which, if already misaligned, could cause you to veer off the road. Likewise, locking out the back wheels with the handbrake can cause the car to spin out and be a hazard to road users behind it.

Be alert, be aware, and be safe

When it comes to driving on an icy road, whether visible or black ice, we would recommend (along with other experts) that unless it’s unavoidable, don’t take the risk. It never requires a large catalyst to result in a car losing control on the road, no-matter how good the driver is behind the wheel. Treacherous roads are an understandable downfall to our country’s climate and family, managers and friends will all know this. If it’s better not to drive, come up with an alternative.

If there is no other choice, driving slowly and keeping the car on course are key. Usage of breaks should be to help assist with the path of the car, rather than an instant fix for veering off course; that could result in some serious damage to your car, yourself, other cars, property, cyclists and even pedestrians nearby. There is no such thing as going too slow after a night of freezing rainfall. Protect yourself, your vehicle and everybody around you by setting the example and keeping yourself in safe hands on the road.

What if somebody hits me?

If you happen to suffer an incident in the icy conditions and fall victim to an accident at the hands of somebody else, as a driver, cyclist, pedestrian or passenger, then you do have options to help get past any damages caused. Road traffic accidents in the winter on ice can escalate from what would be very minor bumps and scrapes, into serious incidents because of the lack of control.

Collisions in the winter months can not only cause excess, unnecessary damage but the cost of the damage both financially and physically can wreak havoc on carefully laid plans during the holiday season. If you do happen to suffer in an incident, Sincere Law is available to help deal with serious injury claims as a result of a road traffic accident on icy roads. We are available to contact every day from 8am to 9pm via phone on 0800 092 2896, by email at info@sincerelaw.co.uk or by filling in our contact form here on our website.

We’ve assisted clients up and down the UK for the last 24 years in the serious injury sector. Inside our headquarters we have assembled a large team of the top UK Solicitors each with their own extensive background. With so many professional resources available, your best choice in serious injury law is Sincere Law.

We use cookies to ensure that we give you the best experience on our website. If you continue to use this site we will assume that you are happy with it.OkRead more